Also, tell you what to look for when choosing a 0w-20 engine oil and which 0w-20 oils are the most popular on the UK market.

The most common recommendation for 0w-20 oils is found in Honda: this concern was the first to switch to total use of the lowest viscosity in all its vehicles.

Also, 0W-20 engine oil can be recommended for new Korean and some German cars, both in winter and summer. And, of course, such oils are also suitable for hybrid engines with low operating temperatures.

Which 0w-20 viscosity oil should I choose for my car?

Most of the 0W-20 engine oils produced are synthetic (or hydrocracking) based, the remainder is semi-synthetic. We recommend using fully synthetic motor oils from popular brands for your car, such as Castrol, Liqui Moly, Mobil 1, Motul, and Idemitsu. 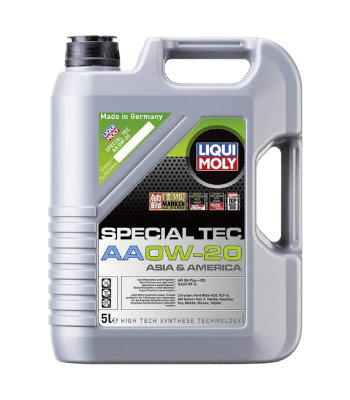 Low-viscosity oils, of which 0W-20 is one of the most liquid oils, are recommended for the most modern engines which have stringent requirements for lubricants in terms of environmental and fuel efficiency.

The increased fluidity of 0W-20 engine oil enables it to circulate easily inside the engine compartment in frosty conditions.

Liquid oils are used for quick pumping in cold weather so that the engine will be lubricated instantly when starting without warming up.

The 0W-20 engine oil can be used in four-stroke diesel and petrol engines manufactured in Japan, Korea, and China. It is not suitable for the majority of European and US automobiles (only a few models, mainly sporty ones, are produced so far for 0W-20 fluids).

Lubricants of this viscosity are designed for power units with minimum clearances. For this reason, it may only be used according to the recommendations of the vehicle manufacturer.

Despite the fact that 0W-20 is an all-season oil it retains its characteristics better in cold conditions. This is why it is best used in regions with harsh winter and moderately warm summer weather.

0W-20 oil has certain advantages over its thicker counterparts

Because the viscosity and performance characteristics of a superfluid oil are designed primarily for low-temperature conditions, a cold engine receives instant lubrication throughout the system at start-up. Its resistance to harsh frosts relieves the problems of people living in northern regions.

The higher the oil’s viscosity, the more resistance it puts up against the gears and the more effort it requires from the engine. Grease with the lowest viscosity ensures the most efficient crankshaft cranking. Optimum distribution of the power load leads to an economy of the fuel mixture.

Japanese Honda has proven that oil with 0W viscosity grade can save up to 1.5% fuel compared to 5W oils.

0W-20 oils always contain a detergent additive package. This is because the clearances between the friction pairs of the engine are too narrow, so they must not be allowed to become dirty.

Continuous cleaning of the engine compartment not only protects it from serious damage but also contributes to better performance.

At temperatures above +15 °C (59.0 °F), the oil becomes too thin and loses its ability to protect engine parts.

A significant disadvantage for many car owners is the high price of 0W-20 oil – often it exceeds the cost of standard lubricants almost twice.

If the oil is not properly selected, and the power unit is worn out, the working material may seep into the combustion chamber. This can lead to premature engine wear and increased exhaust emissions.

US API standards stipulate two groups of classes for cars:

Asian engine oils are often certified not only to globally recognized API and ACEA standards but also to the ILSAC standard, which is the most accurate recommendation for the Asian market. This is handled by the International Lubricants Standardization and Approval Committee, which is based on the Japanese and American automobile associations JAMA and AAMA.

For Japanese cars, you must use engine oil that has ILSAC GF-5, and GF-6 specifications.

The most popular Japanese car brands are:

The most popular Honda models:

The most popular Mazda models:

The most popular Mitsubishi models:

The most popular Subaru models:

The most popular Suzuki models:

For Korean cars, you must use engine oil that has ILSAC GF-5, and GF-6 specifications.

The most popular brands for Korean cars are:

The most popular Hyundai models are:

When selecting which engine oil to use for your vehicle, please consider the manufacturer’s specifications.