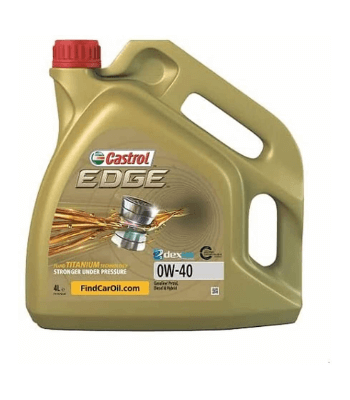 Castrol EDGE 0w-40 A3/B4 lubricant has been developed by Castrol technologists for petrol and diesel engines with the required viscosity index SAE 0w-40.

This oil is based on a special composition of TITANIUM FST molecules, namely titanium compounds that double the strength of the lubricating film. Moreover, such a solution to the oil composition enables its particles to fill up the gaps in the film which appear during the operation. This is especially true in combustion engines operating at the highest performance level – their owners like to kick the accelerator pedal to the floor to ensure that they are always in first place at the finish line.

During such loads, only TITANIUM FST-based grease is able to produce a coating that really absorbs shocks and reduces friction inside an internal combustion engine.

The manufacturer claims, and this has been proven in independent tests, that Castrol EDGE 0w-40 A3/B4 will work beautifully in both city driving conditions and on the track, where the car’s maximum performance is required. And of course, it is optimally suited to urban driving.

This synthetic lubricant, based on Castrol’s TITANIUM FST platform, has the performance-enhancing properties that are essential in today’s highly modern engines.

It is recommended by the world’s leading vehicle manufacturers – BMW, Ford, Mercedes-Benz, Porsche, Volkswagen and others. Selecting the right engine oil, pay attention to the specific specifications in order to arrive at the correct selection.

Castrol EDGE 0w-40 A3/B4 provides reliable and most efficient operation of modern high-speed engines of manufacturers of sports and tuning equipment, as well as luxury cars that require a high level of protection and the use of low-viscosity oils with enhanced performance characteristics.

Castrol EDGE 0w-40 Titanium FST was created especially for modern high-speed engines of sports, tuned cars, and luxury cars. Suitable for both petrol and diesel engines. Allows you to unleash the full potential of your car and significantly reduces the production of harmful exhaust emissions.

Shows its best qualities under all driving conditions. It is suitable not only for high speeds and highways but also for increased loads during urban driving. For driving with frequent stops at numerous traffic lights and restarts can be as harmful to the engine as motor racing and off-roading.

Castrol EDGE 0w-40 A3/B4 is tested, applied, and recommended by leading European car manufacturers. These include Ford, BMW, Porsche, and Volkswagen. It is aimed primarily at European and Japanese modern cars.