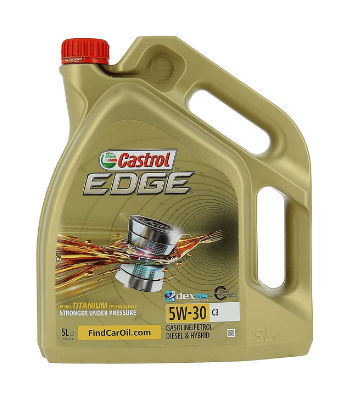 TITANIUM FST radically changes the oil’s behavior under extreme load conditions, forming an additional shock-absorbing layer. TITANIUM FST has been proven to double the film’s strength, preventing oil breakage and reducing friction for maximum engine performance. With Castrol EDGE your car is ready for any challenge, whatever the conditions.

Castrol EDGE 5w-30 C3 is a high quality synthetic. It is available in several varieties. These are LL and C3. The uniqueness of the series oils is that they are created using the technology which is the only one all over the world. The technology is called TITANIUM FST™. A method developed by the company allows titanium compounds to be added to the oil base.

The metal, renowned for its strength, transmits this characteristic to the oil. A product with titanium properties forms a film that is not easily torn off. This film gently, like a caring blanket, wraps your car engine parts. The engine is protected from start to finish, down to the smallest detail.

Moreover, Castrol EDGE 5w-30 C3 TITANIUM FST titanium protection film behaves differently depending on the conditions. So if your vehicle gets into a rut – simply put, in extreme conditions – the film activates, changing its properties. Under various kinds of tests, the strength of the layer increases twofold. This layer is excellent at absorbing shocks and reducing friction. It is also difficult to tear.
Due to these properties, the oil provides the heart of the machine with special, unequaled protection.

The Castrol brand range is a lot of similar products at first sight, which have very similar markings. However, this similarity is very superficial and synthetic motor oils Castrol EDGE 5w-30 LL and Castrol EDGE 5w-30 C3 although they are based on the same revolutionary technology TITANIUM FST, are significantly different in their use.

The secret of revolutionary Castrol TITANIUM FST based technology is that it provides safety for all engine components, based on active titanium compounds that are renowned for their strength and durability. Not without reason, the marketing slogan of this oil is “the power of titanium”. It is the titanium compounds that reinforce the lubricating film, which protects the engine from wear.

This film is especially important for the first cold start of an engine, as the friction forces may cause the hardest damage at this time, as well as for idling, which severely wears out the internal combustion engine.

Of particular note is the fact that if the lubricating film gets damaged under heavy load, intelligent molecular compounds find the leaking point and repair it in order to prevent the friction force from damaging the metal.

As part of the worldwide fight for the environment, Castrol EDGE goes through a sequence of micro-filters at the production stage, according to the Castrol OPMS standard.