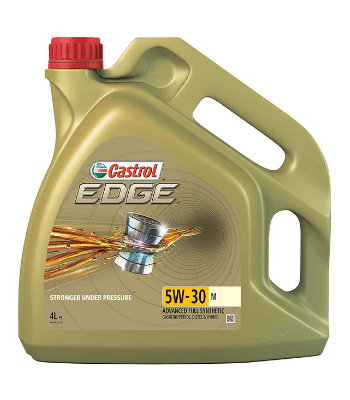 Modern engines are getting smaller, but the power output is increasing significantly and engines are becoming more efficient. Increased pressure in modern engines causes friction which can reduce engine performance by up to 10 %. For modern car owners, a 10% loss in engine efficiency is unacceptable.

Castrol EDGE with Fluid TITANIUM technology is advanced engine oil. An oil that converts under pressure, reducing friction so you can get the full potential and power from your engine.

Castrol EDGE 5w-30 M is the natural choice for car owners wishing to maximize the performance of engines built to the latest technologies currently available, which require high performance oils with a high level of component protection.

The secret of revolutionary Castrol TITANIUM FST based technology is that it provides safety for all engine components, based on active titanium compounds that are renowned for their strength and durability. Not without reason, the marketing slogan of this oil is “the power of titanium”. It is the titanium compounds that reinforce the lubricating film, which protects the engine from wear.

This film is especially important for the first cold start of the engine, as the friction forces may cause the hardest damage at this time, as well as for idling, which severely wears out the internal combustion engine.

Of particular note is the fact that if the lubricating film gets damaged under intensive strain, intelligent molecular compounds find the leaking point and repair it in order to prevent the friction force’s destructive action on the metal from getting in the way.

As part of the worldwide fight for the environment, Castrol EDGE goes through a sequence of micro-filters at the production stage, according to the Castrol OPMS standard.

Castrol EDGE 5w-30 M is designed for use in gasoline and diesel engines, where the manufacturer recommends using motor oil complying with industry standards ACEA C3, API SN PLUS, and viscosity grade SAE 5W-30. Castrol EDGE 5W-30 M is approved for use by leading equipment manufacturers (see specifications section and vehicle owners manual).
It can also be used for hybrid powertrains. Castrol EDGE 5w-30 M is suitable for most modern cars (BMW, Nissan, Toyota, Infiniti, Mercedes-Benz, and others).