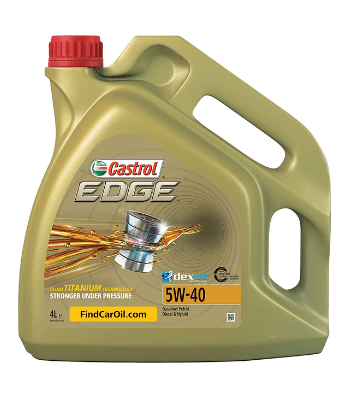 This lubricant must cope with the following tasks: reducing friction through a special film, providing engine cooling, eliminating oxidation and protection. These parameters are determined by the viscosity, which is included in the concept. The higher the value (in our case it is number 40), the better the efficiency and performance of the engine oil.

This allows the fluid to circulate reliably at temperatures down to -30 degrees. In addition, the synthetic product is all seasonal, including various additives for additional engine cleaning. In simple words, the first number indicates the oil’s viscosity in dynamics, the letter W states that the product belongs to the winter grade, and the subsequent numbers indicate the maximum operating temperature of the oil in summer. As you can see, understanding the terms is not a problem.

Castrol engine oil is one of the most popular lubricants for car engines. Castrol EDGE 5w-40 is a reliable protection for any engine. It protects against negative effects, prevents sooting, and is effective for use in engines with high mileage.

Castrol EDGE 5w-40 engine oil is a newly developed, research-based, pure synthetic lubricant with titanium particles that not only protect the engine well but also clean it. This grease is created using a special TITANIUM FST technology.

The grease produced in this way has a particularly strong oil film, which retains its strength and elasticity for a long time. The product is more resistant to temperature fluctuations and mechanical stress, and also significantly reduces friction.

This allows the engine to operate at maximum efficiency in all conditions and fully exploit its efficiency. With it, every car unleashes its full potential and demonstrates its best qualities.

Titanium additive functions in a way that allows Castrol EDGE 5w-40 to vary its behavior and characteristics depending on the vehicle operating conditions. In other words, with a measured driving style it is just a good oil.

But when encountering extreme conditions, it creates a particularly tough, shock-absorbing layer. This film is twice as strong, it is difficult to break when exposed to mechanical stress and the friction remains under all loads.

Castrol EDGE 5w-40 provides reliable and most efficient operation of modern high-tech engines built on the latest engineering developments, which operate under conditions of tightened tolerances of vehicle manufacturers that require a high level of protection and low viscosity oils.

The area of application of Castrol EDGE 5w-40 engine oil is power units for different purposes and operations. Many European manufacturers recommend it for use.