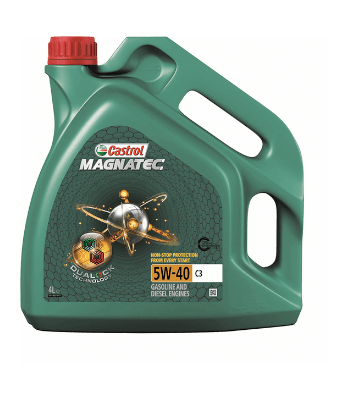 Castrol MAGNATEC is an engine oil that provides permanent protection for your engine. They contain so called ‘smart molecules’ which are capable of adhering to the engine surface under all driving conditions and even when the engine is switched off.

Castrol Magnatec molecules are unusual in that they are magnetically attracted to important engine parts, creating a ball of protection that will stay on even when the engine is switched off.

The unique ‘Intelligent Molecules’ are attracted to metal surfaces and form an extra strong oil film to protect friction pairs from wear;
Guaranteed protection for the parts most exposed to wear, such as camshafts and valve tappets.

Protects under a wide range of operating conditions and driving habits:

Fully synthetic oil base ensures easy cold starting of the engine, even at low sub-zero temperatures.
Tested and approved in accordance with the classifications of the Association of European Automobile Manufacturers (ACEA) and the American Petroleum Institute (API).

Approved by Volkswagen and Mercedes-Benz for use in both petrol and diesel engines.