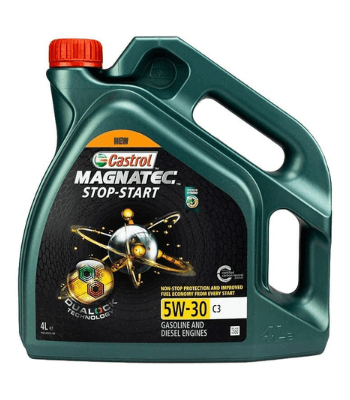 When choosing an engine oil, it is important to consider not only its flowability, but also the operating conditions in which the vehicle will be used most often.

For example, if a car owner lives in a big city, they are inevitably faced with the phenomenon of traffic congestion. This forces the internal combustion engine to idle frequently, at the same time accelerating and braking rapidly. All this combined is not the best for the engine’s service life.

Exactly for such driving circumstances specialists of Castrol, the leader in the production of fuel and lubricants worldwide, invented a product Castrol MAGNATEC Stop-Start 5w-30 C3.

MAGNATEC technology is based on the principle of magnetizing molecular compounds that adhere to the metal parts of an internal combustion engine, creating a special tough lubricating layer that protects important engine components from the friction forces and the subsequent wear.

The “smart” molecules lock securely in place on the engine parts, without slipping downwards as is the case with counterpart oils on the market. This solution enables a safe and easy start of the vehicle, even after a standstill.

Castrol MAGNATEC Stop-Start 5w-30 C3 has a number of advantages over competitors’ offerings.

On the downside, buyers point out the lack of protection during racing and the copying that occurs.

Using the Magnatec platform, Castrol MAGNATEC Stop-Start 5W-30 C3 ensures an envelope of molecular compounds in the lubricating layer of the engine parts to protect them from the wear.

Castrol MAGNATEC Stop-Start 5w-30 C3 cares about the environment. After all, its specification allows for use in petrol engines with catalytic converters and diesel engines with particulate filters – exhaust gas after treatment systems. In general, it is suitable for a variety of passenger cars. It is presented for use in their vehicles by the world’s leading car manufacturers – BMW, Mercedes-Benz, Renault, Volkswagen, and others.