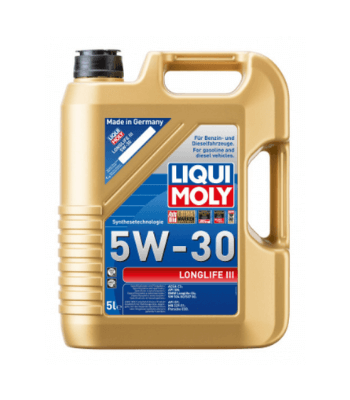 A high-performance, lightweight engine oil for all-season use. Out-of-the-box base oils, state-of-the-art additives and the special component Moligen have resulted in a low viscosity, high-stability engine oil that effectively prevents deposits, reduces friction losses and optimally protects against wear. These properties help to save fuel and increase engine life at the same time. Liqui Moly Longlife III 5w-30 is recommended for the majority of Japanese and American engines.

Recommended for a wide range of modern diesel engines of European automakers, such as Volkswagen-Audi (except R5 TDI and V10 TDI, built before 06.2006, for which the Synthoil Longtime Plus 0W-30 is suitable); Mercedes-Benz; BMW. Excellent for most modern diesel cars manufactured in Korea with particulate filters (DPF).

Liqui Moly Longlife III 5w-30 is an engine oil based on HC-synthetic technology with the proprietary anti-friction additive package Molygen, created on the basis of the latest technology of Molecular Friction Control. Optimized for American and Asian vehicles.
Saves up to 5% of the fuel and significantly prolongs engine life. The engine oil meets the latest specifications API SN/CF and ILSAC GF-5 and has the most popular viscosity grade for modern cars.

Tested for compatibility with catalytic converters and turbochargers.

Optimally suited for modern Japanese and American multi-valve gasoline and diesel engines with and without turbocharging, and intercooling. Provides protection and high service life for demanding engines at high oil change intervals.
Observe the operating instructions and vehicle manufacturer’s instructions. Mixed with oils of similar specifications. The optimum effect is achieved with a pure product.

The combination of state-of-the-art base oils and the latest unique Molygen additive package, based on hybrid MFC technology, gives the engine oil unsurpassed protective properties. MFC (Molecular Friction Control) technology works by allowing the surface layer of engine parts with molybdenum and tungsten ions. The resulting alloyed surfaces have a very high safety margin, which lasts for a long time.